If you’ve ever heard people talk about chicory coffee and wondered about it, let me just tell you right off the bat that it’s not the same as “coffee coffee”.

The chicory plant, known scientifically as Chicorium Intybus Sativum, has a similar aroma and flavor in its roots to coffee. 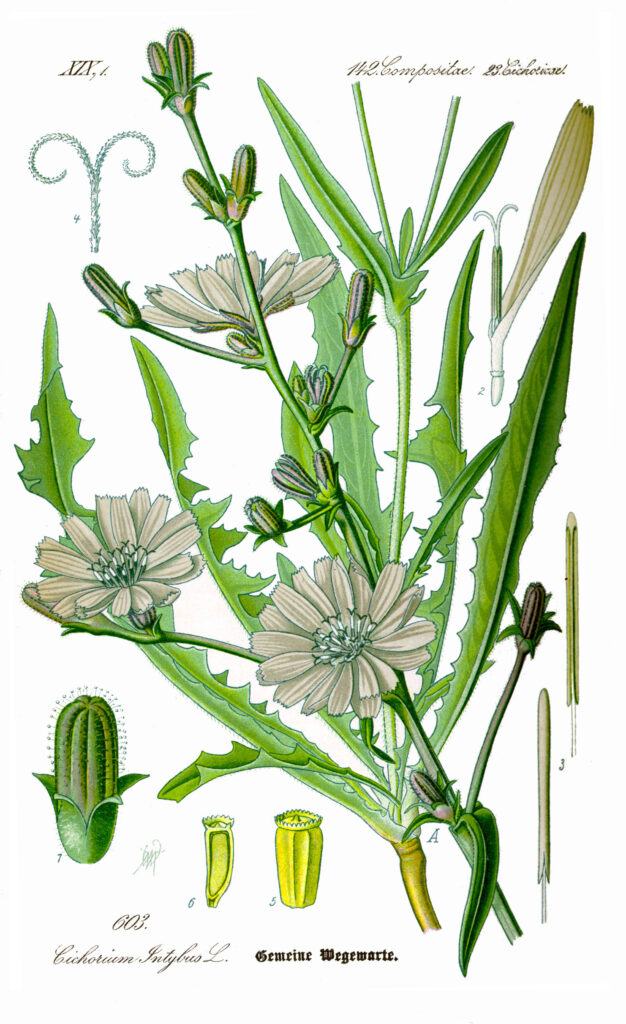 But let it be known, chicory contains no caffeine, so whether you drink a chicory and coffee blend or just a chicory drink itself, it has either less caffeine than coffee (if it’s a blend) or no caffeine at all!

This can have its upsides or downsides, depending on how much coffee and caffeine consumption you want.

Some people can naturally handle more caffeine than others.

And even though I’m a coffee lover myself and absolutely love caffeine, I know that even I myself can only handle a certain amount of caffeine from coffee.

If you’re in a similar boat, chicory coffee can be a good option, or even a great option if you want to drink coffee later in the day but you know you shouldn’t have the full caffeine amount of a cup of coffee.

We’ll even look at the other health benefits of chicory a bit further down, along with other things, including some recommendations!

But now let’s look at one of the most important things about chicory… the taste!

The grounded chicory root is more water soluble than coffee, so you don’t need as much of it as coffee to make a strongly flavored drink.

One reason why chicory is so often combined with coffee as a beverage is because they taste somewhat similar.

So the taste of chicory is close to coffee, but it has a warm, woody, nutty flavor and body.

It also has an earthy flavor to it, and almost slightly sweet like licorice.

It’s not that it taste exactly like it, but the times that I’ve had chicory coffee, it kind of reminds me of root beer.

Even if I can describe the flavor to you, the only way you can really know that you like it or not is if you try it.

It’s actually a member of the dandelion family.

The chicory plant is relatively small, with a tough, hairy stem, and lots of green leaves and purple flowers. Chicory root has a long history as natural medicine because of its many nutritional values.

This is partially due to the presence of inulin in chicory root, which has been linked to increased gut bacteria health and weight loss.

A chicory root weighs about 60 grams, and has 44 calories.

Chicory also has Vitamin B6 and C, Potassium, Phosphorus, Folate, and Manganese; although there will be only very small amounts of these in chicory coffee.

Because of its health benefits, chicory is popular among those who want to control their diet and/or looking to drink less caffeine.

Even though the taste of chicory may be slightly similar to coffee, beverages made with just chicory don’t have any caffeine.

Here are some other health benefits of chicory…

It’s a great source of inulin, but you’re only going to get a little bit through drinking chicory coffee.

Inulin is an excellent fiber for gut health, which is very important for overall health, and it has many good impacts your digestive system.

It can improve the amount of healthy bacteria in your colon and increase bowel movements.

While almost everyone deals with some form of inflammation through their lifetime, chronic inflammation can cause some pretty serious health problems, such as cancer, heart disease and diabetes.

Several tests have been done that show chicory’s ability to lower inflammation in animals, which is a good sign, though more tests need to be done to see how well chicory might affect inflammation in humans.

Inulin, which I’ve mentioned above, has been studied in both people and animals, and has been shown to help manage blood sugar.

Insulin resistance happens when a person’s blood sugar levels are high, and is a problem in diabetes.

If you’re looking to get some chicory coffee, I have some awesome recommendations for you!

Chicory coffee has been especially popular in New Orleans for some reason, and there are some good brands that come from there.

But, the good thing is, you can get them online!

This first brand is probably not only the most popular, but probably the best too.

If we’re talking about chicory coffee, you really can’t go wrong with it!…

==> Click here to see the best deal on this classic, delicious chicory coffee! <==

And below, here’s another brand that has become known as one of the best tasting chicory and coffee blends you can get.

They have expanded their line of coffees and roasts and they have thousands of great reviews on Amazon.

Also, a can of this is even less expensive than the first brand!

In conclusion, chicory coffee is a delicious, and somewhat healthy beverage that not every diehard coffee lover will enjoy, but certainly many will.

If you’re looking for something that is a bit easier in the stomach than just coffee, it will definitely help.

Chicory coffee is really a New Orleans signature beverage that will practically take you there when you drink it!

And I hope that if you try these recommendations above that you’ll enjoy them!

Just remember that if you’re expecting just coffee, it may not be the drink for you because it doesn’t taste totally like straight up coffee.

If you have any questions or comments, please feel free to let me know in the comments section and I’ll be happy to help.

And with that, chicory coffee cheers!