It may or may not surprise you to know that coffee is kind of a tropical plant, or fruit, or bean, or whatever you want to call it.

And before you think I don’t know what I’m talking about… a coffee bean comes from the seed of a coffee cherry, which is a fruit! So it’s not far off to say that it’s some type of fruit.

The coffee cherry grows on the coffee tree, which is only found in certain regions of the world.

These regions of the world that have a suitable climate for coffee growing are inside an area called the coffee belt.

I’m from San Diego, California, which if you look at a map you can see that it’s just barely outside the coffee belt.

Otherwise it would be so cool to have San Diego coffee.

Now let’s look at the world’s top coffee producing countries from the coffee belt, followed by the flavor characteristics of different parts of the world!

Here’s a list of the countries that produce and export the most coffee in the world.

It may or may not surprise you.

So here we go, starting with number 1.

Brazil produces a lot of coffee… I mean, a lot!

It can grow all over the country and the coffee plantations span a massive 2 million hectares.

It comes out to well over 2 million tons of arabica beans every year!

And that’s a million tons more than the second largest coffee producing country, which we’ll get to in a second.

With Brazil’s ideal climate, and being such a large country with many farms, it is by far the big gun when it comes to coffee production.

They produce about 1.5 million tons per year.

But interestingly enough, unlike Brazil who produces mostly arabica beans, Vietnam mostly produces robusta beans, about 90% to be precise.

Arabica is, by the way, the most popular variety of coffee bean consumed. Although robusta contains more caffeine.

The robusta beans grown in Vietnam account for about 20% of coffee consumed in the world.

Instant coffee is made with more robusta beans in the mix than most other “regular” coffees, which is probably why the robusta beans from Vietnam account for such a high percentage of coffee consumed.

Instant coffee is pretty popular, after all… whether that’s a good or bad thing.

The tasty treat “Vietnamese coffee” is usually made with robusta beans also.

The sweetened condensed milk that’s mixed with the coffee is a delicious contrast to the more bitter flavor or robusta beans.

If you’ve never had Vietnamese coffee with sweetened condensed milk, it’s worth a try.

Here’s one you may not be surprised about.

Colombian coffee is just a big thing, produced by mediocre coffee companies that taste less than desirable, and by awesome roasters that make delicious roasts.

Coffee cultivation in Colombia goes all the way back to the 1700s.

With a whopping 754,000 tons of coffee produced per year, or thereabouts, it’s still a ways behind Brazil.

But Brazil is a much larger country than Colombia.

One cool thing about Colombia and it’s coffee production is that all of the coffee produced there is arabica.

Even though there are unfortunately many mediocre brands that produce Colombian coffee and almost give it a bad name, if you get it from a great brand it really tastes amazing and I love brewing a high quality Colombian coffee.

Next up we have Indonesia.

A good quality Indonesian coffee is like nothing else.

The country produces over 668,000 tons approximately per year.

The Indonesian island of Java was the first place outside of Africa and Arabia that coffee was grown, going all the way back to the 1600s.

So not only does the coffee have a rich taste, but a rich history too.

It’s mostly robusta beans that are grown in Indonesia.

If you’d like to try a great Indonesian coffee, from Sumatra, I’d highly recommend this one!

But remember, most of the coffee from this region has a robust, earthy, floral kind of taste which I think is delicious… but just so that you know what you’re getting.

I won’t go into detailed explanations for the rest of top coffee producing countries, but just to list out what they are anyway, in this order…

But these are indeed the top producers of coffee.

The Flavor Profiles Of Different Regions

Here’s a fun part of this discussion.

Certain regions of the world have certain flavor profiles when it comes to how the coffee actually tastes.

If you didn’t know about this before, it may be kind of a revelation and it may help you when it comes to your coffee purchasing so that you get the kind of coffee you like more often!

So without further ado, let’s take a look at the different regions and what their coffee is like! 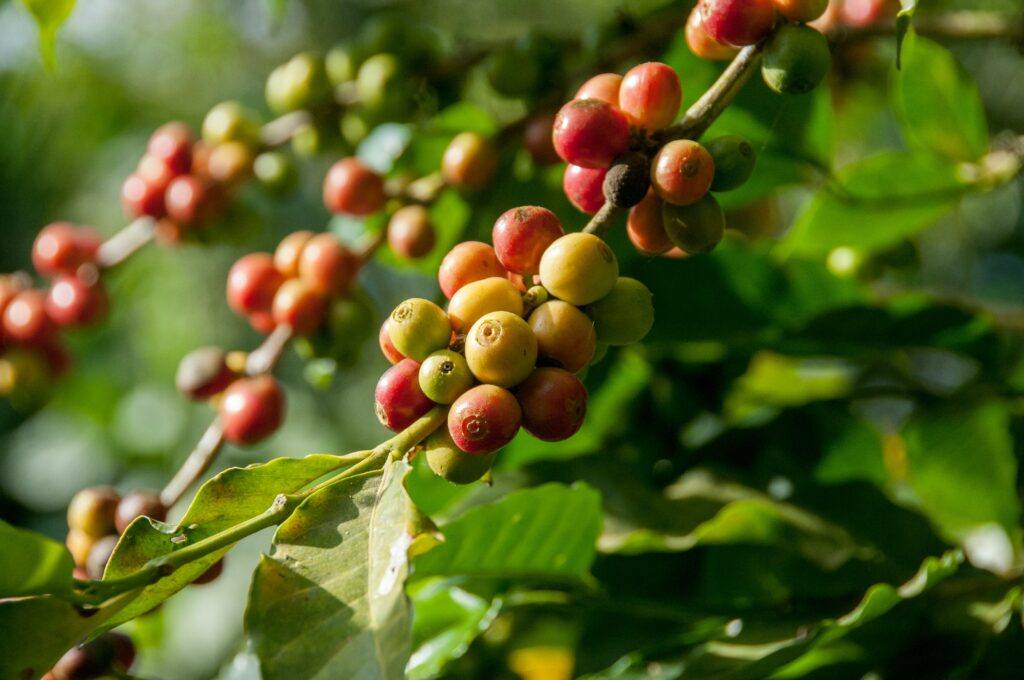 It includes countries such as Brazil, Colombia, Peru, Guatemala, Nicaragua, Costa Rica, and others that have a reputation for nice coffee.

Usually, coffee that comes from countries in South America seem to contain flavor profiles that include notes of sweet, fruity, berry, nutty, floral and these kind of bright characteristics.

The acidity is usually pretty pronounced and bright also. On a scale from mild to strong, the acidity tends to fall into a medium to strong range.

So if there was one word that can typify coffees from the region of South America, I’d say that it’s bright.

The quality of coffees that come from countries like Colombia or Brazil can be bland and mediocre to really good and high quality, so I suggest that you buy from a quality roaster if you’re looking for a good South American roast!

Hopping over the Atlantic ocean, we come to Africa.

Some of the major producers of coffee in Africa would be Ethopia, Kenya, Uganda, Tanzania, Ivory Coast….

And whereas the South American coffees come in a wide variety of quality… really good to really bad, usually African coffees seem to be something that the mediocre roasters and companies shy away from.

African coffees tend to have a low-medium acidity, generally.

And if there’s one word can pretty well describe coffees that come from Africa, in my opinion it would definitely be citrusy!

You’re almost hard-pressed to find a coffee that comes from Africa that doesn’t have some taste of lemony zest, orange, or some other citrus flavor to it.

And I just love it.

The last major region that we have is Asia.

It includes a wide range of nations that produce coffee such as Vietnam, Indonesia, India, China, Laos, etc.

For a long time, I could say that Asian coffee (specifically Indonesian) was my preferred brew.

Asian coffees are often dark roasted because of their distinct flavors, and I love a good dark roast coffee.

The typical flavors that you’ll get from coffees which come from Asian countries include earthy, floral, woody, nutty, spice, dark chocolate, smoky, etc.

The acidity in coffees that come from this region is generally low.

This is because of the coffee itself and because it’s often dark roasted, both of which give it a low acidity.

And if there’s one word I’d use to describe for coffees from Asia… well, this one’s a bit harder!

But still, I would describe them generally as earthy.

This certainly doesn’t describe all of them, and the earthiness is usually strongest in Indonesian coffees, which are the most popular Asian coffees.

So while earthy maybe can’t describe all the Asian coffees thoroughly, it’s a fairly good idea of how they usually come across.

It truly is fascinating to look at the coffee belt and how coffees from different regions of the world taste!

I hope that you learned some great information from this article.

It’s interesting to think about the coffee we most often drink compared to the top coffee producing nations.

You may not often drink a coffee that’s a single origin Vietnamese coffee, even though they’re the second top producer of coffee.

This is because of the type of coffee beans that they grow, and the general quality of the coffee.

Often, the coffee from the top producers gets mixed in blends and isn’t really “shown off” on the label for this reason.

So next time you get a good coffee from Africa or South America, remember to enjoy it for the treat that it is!

If you have any questions or comments about this article, please feel free to write in the comments section and I’ll be happy to hear from you!