What exactly is the difference between these two very similar sounding beverages?

And can you make them at home?

First off, yes you can make both of them at home!

And the difference between them is pretty simple. They’re both delicious, and you can make both of them very easily and quickly at home with just one amazing coffee maker!

But I’ll talk about that just a bit further down.

You may have seen both of these drinks on a menu board at your favorite coffee shop or heard people talk about them, and maybe you thought they were the same thing.

They are similar, yes. But they definitely aren’t the same thing!

So if you’ve been puzzled or wanted to know exactly what the difference is, or if you want to make them at home easily but don’t know how, then you’ve come to the right place!

I won’t keep you in suspense too long, so first off… here’s the difference!

Well, let me answer that by just telling you what they both are.

Iced coffee is when you used either hot or cooled down coffee over ice and usually put milk and a sweetener in it.

Cold brew is when you brew coffee at room temperature or at a cool temperature rather than hot.

So if you just read that and you’re thinking… well then Danny, if that’s the case, can’t we use cold brew to make iced coffee then??

And the answer is yes! You definitely can. I do it all the time. The two can be combined and it tastes great. But they’re absolutely not the same thing!

Another thing to note is that iced coffee is very similar to an iced latte. The only difference in ingredients is a latte uses espresso and an iced coffee uses regular coffee.

But with an iced latte, there’s just a very small amount of “coffee flavor” because the espresso is only about 10 or 20% of the drink.

With iced coffee, you put mostly coffee in and top it off with milk and/or sweetener. The coffee is usually about 60 to 75% of the drink.

You can use any kind of coffee to make iced coffee. What I mean is that you can cold brew it, you can use hot-brewed coffee that’s been cooled down in the fridge overnight…

For cold brew, the coffee has to not involve heat in the brewing process. So if you brew a coffee hot and then let it cool in the fridge, that’s not cold brew.

Because of this, the cold brew process usually takes much longer than making hot coffee… hours and hours longer.

Although, if you want to make cold brew at home, there’s a super simple, delicious and fast way to make your own cold brew… and thus, also your own iced coffee!

I’m talking about the AeroPress!

This is, in my opinion, the best way to make cold brew coffee.

AeroPress an amazing coffee maker for so many reasons, and if you’d like you can read about them here in this article I wrote a while back.

One thing that’s awesome about AeroPress is that it makes not just delicious cold brew, but it brews an amazing, low acidic hot coffee too.

AeroPress is such a great way to make cold brew because the actual steeping of the coffee takes one minute!

That’s opposed to the approximately 12 to 16 hours it takes to make cold brew the more old fashioned way. And I’ll also explain those other methods below.

If you don’t have an AeroPress, getting one is the first step, and it’s well worth it! I’d say it’s an essential for anyone who wants to make great home brewed coffee.

==> Click here to see the best deal on the AeroPress coffee maker! <==

If you have an AeroPress, you’ll probably notice it comes with directions for how to make both hot coffee and cold brew. You can follow these directions and make awesome cold brew.

But here’s some tips and tricks I’ve learned over the last year plus that I’ve been using AeroPress.

A good coffee to water ratio for AeroPress is 2.6 grams of coffee to 1 fluid ounce of water.

I’ve learned through much trial and error that I like to fill the coffee grounds to the number 1 on the AeroPress. I don’t use a scale and I don’t want to take the time to weigh out my coffee; I’m just not that kind of person.

But I know that if I fill the coffee grounds to number 1, I can make my coffee nice and strong or not quite as strong if I fill the water up to line 2, 3, or 4.

How To Use AeroPress For Cold Brew

To make cold brew coffee with AeroPress, you put the filter on the AeroPress and secure it tightly, rinse the filter to make it as clean as possible, then weigh or eye out your coffee and put it into the AeroPress.

For the fineness of the grind, on a scale from 1 to 10 with 10 being the most coarse, you’ll want it at about 3. Almost as fine as espresso but not quite.

When you get ready to pour your water, you don’t need to bloom the coffee, which is a great thing to do when brewing hot coffee.

Just pour the desired amount of water in.

You’re going to want to keep the grinds in the cold/lukewarm water for about a minute in total. It can be more or less, but a minute is pretty much ideal. You can stir the grounds in the water with the AeroPress stirrer for about 15 seconds.

I like to wash off the stirrer while I let the coffee continue to steep.

After you’ve let the coffee steep for a minute, press the coffee with the plunger.

And there you have practically instant cold brew coffee! And it’s super good!

From there you can add ice and whatever else you’d like.

If you do add more water after brewing, it’s good to take that into account when you first measure your coffee!

That way you won’t make it too weak for your taste. But since AeroPress makes pretty strong coffee by default because of the high pressure involved in brewing, you shouldn’t worry too much about it being weak.

With that cold brew, you can simply add ice, milk, and a sweetener and you have delicious iced coffee! 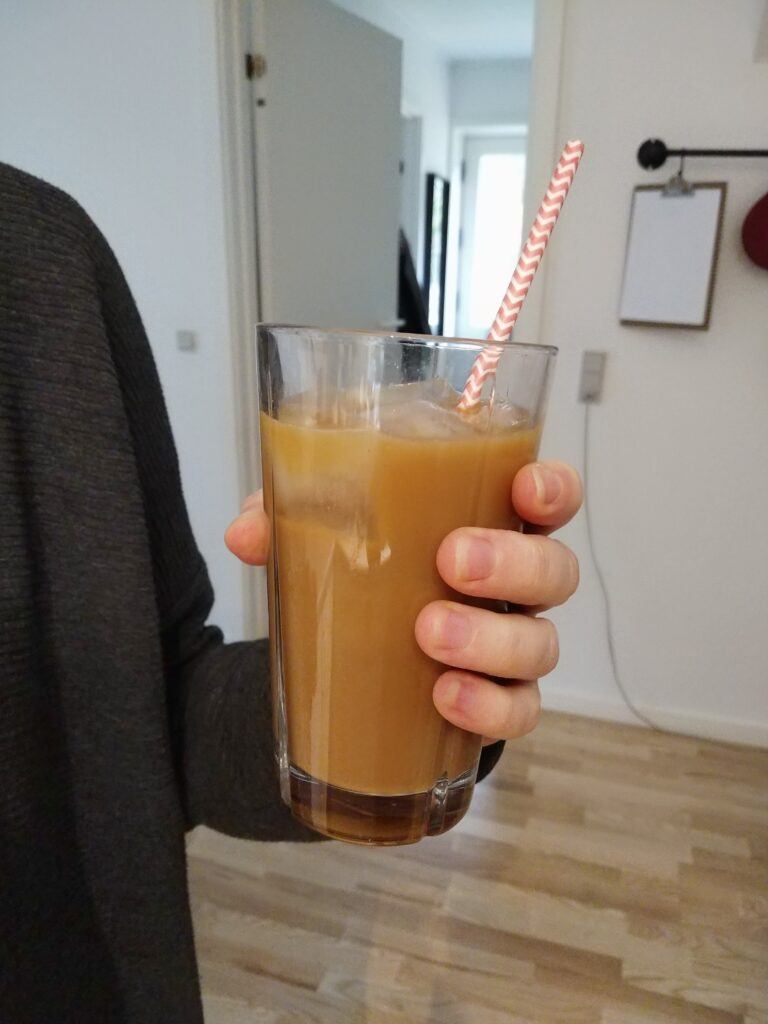 Other Ways To Make Cold Brew

There are some other good ways to make cold brew coffee too!

AeroPress is the best in my opinion, but it’s certainly not the only way. In fact, AeroPress has only been around since 2005 and before that you had to use another method if you wanted cold brew!

Another way to make cold brew coffee is with a French Press. 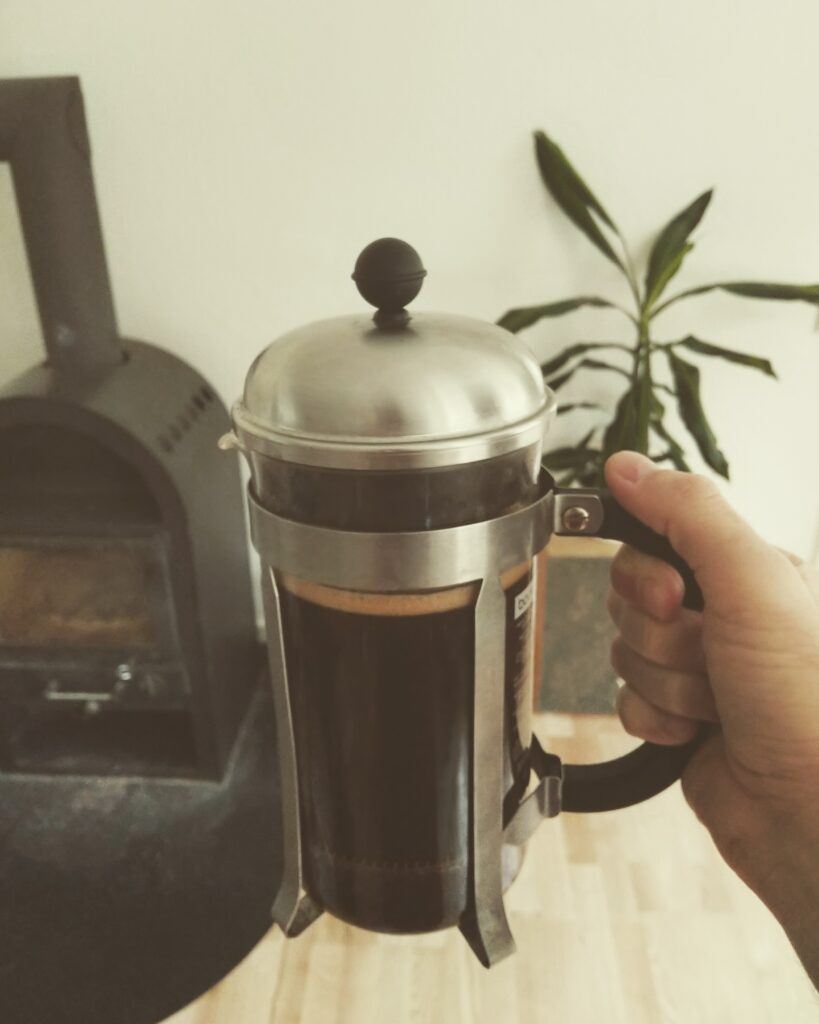 Then gently stir the coffee grounds in the water to let them soak well.

After 12 to 16 hours, press the coffee and then pour it into a covered jar or container. It’s best to put it in the fridge after.

You can also do the same procedure as with a French press but in another container.

Instead of pushing down the plunger and “pressing” the coffee, you will want to use a very fine strainer to pour the cold brew into another container.

You can use a coffee filter as a strainer and then throw the grounds away right after or use them for your garden or something else. Coffee grounds actually have at least a few different uses!

Another way to make cold brew is to use a drip cold brew coffee maker.

They look really cool and they make great cold brew, just like in many coffee shops. You can find some awesome ones on Amazon, like this one by Nispira.

And if you click that link you can find many other small, new and simple to use cold brew coffee makers! There really are a lot of options when it comes to making cold brew coffee.

Now That Everything’s All Clear

Now that you know the difference between iced coffee and cold brew, and how to make both of them, you can enjoy your own homemade, cold and delicious coffee!

Both iced coffee and cold brew with ice are delicious and refreshing in the summer, but sometimes I’m even in the mood for those drinks when it’s not summer!

As long as you make them well, they can be good at any time of year.

And they are both pretty easy to make!

A great thing about cold brew is that it’s a low acidic brewing method.

Many people prefer the taste of coffee that has lower acidity. It’s usually less harsh on the palate when it’s lower in acidity.

The process of cold brew leaves behind some or most of the compounds that make coffee taste bitter or sour.

For both cold brew and iced coffee, you can use whatever type of coffee you’d like!

But since cold brew yields coffee that’s really smooth and even sweet, it’s a great idea to use a coffee where you think those could be brought out!

It may be difficult to figure that out though, as there are many coffees where those aspects would be great with the smoothness and sweetness brought out.

So my advice is to just try your favorite coffee or any coffee you enjoy for cold brew and see how you like it.

And one last piece of advice for iced coffee…

If you make iced coffee using coffee that’s been brewed hot and you’re going to pour it over ice, I would strongly suggest letting the coffee cool down for 5 minutes or so before you put the ice in.

That way you won’t dissipate the coffee because the ice melts.

Otherwise what you could do is just brew the coffee extra strong and put extra ice in immediately after brewing, because much of it will melt anyway.

But in my opinion, it’s best to just make it as strong as you usually prefer or just slightly stronger, and wait 5 to 10 minutes before putting the ice in.

Both cold brew coffee and iced coffee are fun to make, no matter how you make them, and they’re delicious!

If you have any questions about these two drinks, feel free to write them in the comments section below!

Coffee Tips and Tricks, How To
1 COMMENT
PREVIOUS
NEXT