The AeroPress has become a popular brewing method in recent years, and a great coffee brewer supermodel for Instagram.

It has also become my personal favorite coffee maker.

Yes I put up photos of my AeroPress on Instagram too. It’s just too good looking to not show off!

There are many reasons that it’s my favorite and you can read more about them here.

With the advancement of AeroPress technique ever pressing forward, a clever – and seemingly unknown – person came up with the idea of the inverted AeroPress method.

You could just as well call it the upside-down method, because that’s exactly what you do, you steep the coffee with the AeroPress turned upside-down and then flip it.

And flip it good.

Let’s take a look at why, and if it’s really true…

The Main Argument For Inverted

People say that the biggest con of the traditional brewing method for AeroPress is that after you pour the water, it starts to drip down into the cup too early, while the coffee is steeping.

This is true. You can see it if you lift the AeroPress as it’s steeping, or if you’re using a see-through mug or cup.

That being the case, there are also some flavor aspects that could maybe be slightly dulled or lost while the water drips out into the cup during steeping. But the question is… is it really a big enough difference?

It’s a short time, but many baristas and knowledgeable coffee people have said that it’s better to let the coffee steep for a minute or 1 1/2 minutes as opposed to the 10 seconds written in the instructions on the AeroPress.

So I’ve also tried this.

The traditional method for brewing AeroPress is written on the side of the box.

It’s how the inventor intended for it to be used.

It’s a quicker, easier way to brew the coffee and a bit more convenient than the inverted method.

AeroPress is amazing whether you brew it traditional or inverted. The flavor and low acidity is impressive.

That being said, here are the pros and cons about the traditional/original method for brewing AeroPress. 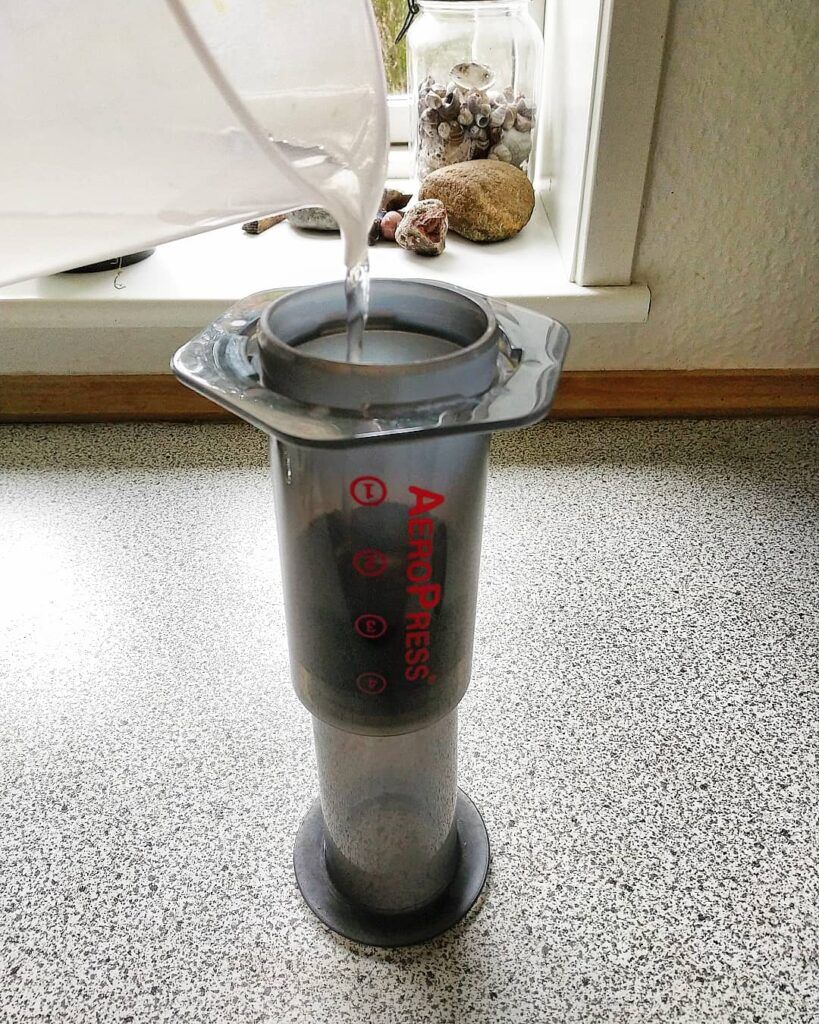 This method is pretty straight-forward. It’s certainly the best way to start with when you first use AeroPress.

At least that’s my opinion.

In short, with the inverted method, you turn the AeroPress upside-down during most of the brewing process and flip it back over right before you press the coffee.

Many coffee aficionados claim that this is the superior way to do AeroPress. I’m not sure that I’m so much of an inverted method revolutionary like that.

I do think it’s fun and has some good pros about it, though.

This method is awkward and a bit… risky? You should be careful when you do the inverted method as there is a slight chance of spilling hot water onto your hands or arms.

You should also be well-acquainted with the proper method for doing it. If you know it and practice it, there’s only a very slight chance of spilling. You’d have to be pretty careless to spill it in that case.

If you’re like James Bond and sometimes you like to live… dangerously… then the inverted method is perfect for you.

The Most Important Part: The Taste Difference

The thing is, the taste should always be the most important factor for you when it comes to brewing coffee.

Brew the coffee that you love, with the brewing method or coffee maker you love! Even the longest brewing methods take a relatively short time.

AeroPress happens to be a very quick brewing method.

Having compared the traditional and inverted method and taste tasted them as carefully as I can, I should say that if I notice any difference in taste it’s only a small one.

I like dark, rich, full-flavored coffee. And even if it’s just a little bit more pronounced, this is what the inverted method seems to deliver.

The inverted method may offer more of the whole flavor profile of the coffee, and at the least it’s a very consistent method of brewing your coffee, which should be appealing.

Is It Really Better?

In my opinion, yes it’s better. I wouldn’t say it’s a world of difference, but there is a difference.

The difference isn’t just in the taste though, as it’s hard to tell a major difference. It’s mainly that you have more control over the brewing and thus more consistency.

Once you get past the awkwardness of flipping over your AeroPress and the balancing act, you’ll find that you’ve gotten past the biggest con about it.

Having more control over the brewing process is maybe the biggest benefit of the inverted method.

For me personally, I really like the fact that I can let my coffee steep for a minute or so and know that none of it will leak out too quickly.

While I personally prefer the inverted method, I wouldn’t argue tooth and nail that it’s the best.

If you haven’t tried it and want to, make sure you look up a good tutorial about how to do it so that you don’t spill hot water on yourself or lose the coffee filter in the process, then give it a try and see how it goes.

If you use an AeroPress, have you tried both methods? Which do you prefer? I hope you found this article helpful and if you have any questions or comments let me know! Coffee cheers!