Did you know that there are four types of coffee beans?

Maybe you didn’t! Unless you’re a total coffee expert.

I could only name two before I wrote this article.

I would bet that a lot of people think there are three types of coffee beans… light, medium and dark. Nope! This is actually the roast.

As I’ve written in another article explaining the difference in the roasts, it’s good to know which of those you prefer. But that’s another topic. 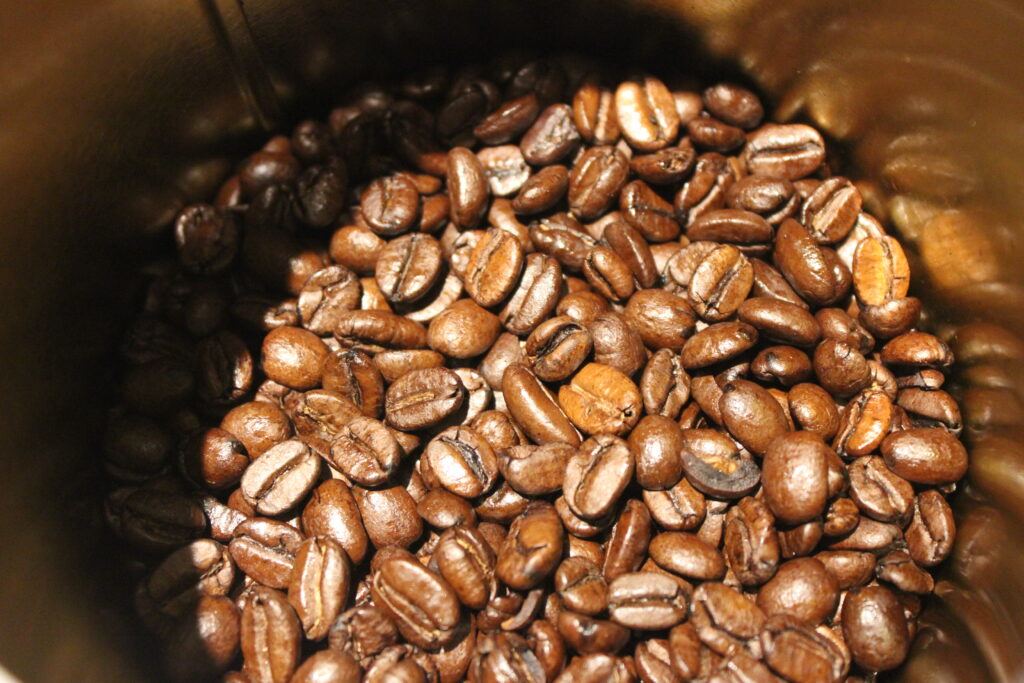 There are four different types of coffee beans, and they have a distinct flavor, caffeine level, and overall feel to them!

We’ll start with the most popular and well-known one. Most popular by a long shot.

You may notice that on probably all the coffee you purchase, it says somewhere on the bag, “100% Arabica beans” or something like that.

If you didn’t know before, this is referring to the type of coffea beans that you are enjoying.

Roughly 60% of coffee produced in the world is Arabica.

The reason it’s so popular is mainly because of its taste. It is called a more delicate coffee because of how it’s influenced by its environment.

It tends to have more pronounced acidity and a flavor profile. It’s also strongly influenced by the environment it grows in, which is why we have so many different flavors and tastes among Arabica beans.

This coffee bean is more difficult to cultivate than certain other types of coffee but it’s known as a good quality bean that yields a rich flavor.

I was taught as a barista that if you see that if a coffee is 100% Arabica it will generally be a nice quality coffee.

Robusta is the second most popular type of coffee bean.

About 40% of coffee sold worldwide is Robusta.

Robusta is exactly what it says… robust! It has a stronger, harsher flavor, and the caffeine content to match. Whereas Arabica beans contain 0.8 – 1.4% caffeine, Robusta contains 1.7 – 4% caffeine.

Robusta has a less variable flavor profile than Arabica. Arabica beans are so versatile in terms of flavor, but usually there are just a few words that Robusta can conjure up in terms of its spectrum… smoky, earthy, burnt, pungent, strong!

Much of the Robusta harvest probably goes to the production of instant coffee, which is likely why instant coffee has so much more caffeine usually then regular coffee.

This extra caffeine is what makes not only the plant itself more durable and not as delicate as the Arabica species, but also gives it the more “robust” flavor.

There are many coffees that mix mostly Arabica and a small percentage of Robusta beans. Many people regard the taste to be not as good as pure Arabica coffee.

But either way, some Robusta in your coffee will definitely give it more kick! Flavor-wise and caffeine-wise…

Not as well-known as the previous two, Liberica is much more rare than Arabica and Robusta.

About 2% of coffee consumption in the world is Liberica.* It’s that rare.

When a disease called “coffee rust” killed off much of the Arabica crop at the end of the 19th century, Liberica was sent to replace the dying crop.

That’s when more widespread cultivation of it began. It’s cultivated in mostly in the Philippines and Indonesia.

It has more caffeine than Arabica but less than Robusta. Coffee tasters have described Liberica as having a woody and smokey taste with a full body.

Apparently it has a pretty bold or distinct taste like Robusta, although in a different way. It’s also the only type of coffee bean that isn’t symmetrically shaped.

You have to really do some searching to be able to find it for purchase, and it may be difficult to confirm if it’s authentic.

Excelsa accounts for about 7% of coffee consumption worldwide.

It’s classified as the same genus as the Liberica family, because it grows on trees that are just as tell and the bean has a similar shape but smaller. It’s actually quite different though.

The aroma of Excelsa is quite unique. Some like it, and most people quite dislike it. But the aroma and the taste are quite different.

The taste of Excelsa is described as mysterious, tart, fruity, dark.

It also has a lingering finish. Similar to Liberica, and Robusta for that matter, it has a taste that is distinct and maybe too powerful or potent for the masses.

Also, similar to Liberica and Robusta, it is usually a small percentage in Arabica blends because it’s too strong for most people just on its own.

On The Coffee Hunt

*Yes I know that we’ve exceeded 100% of coffee consumption with these four coffees, but the reality is that it’s hard to put exact figures on it.

Obviously, Arabica and Robusta consumption is a bit less than 60 and 40%, respectively. (notice the use of “abouts”, “roughlys”, “approximatelys” and so forth)

So next time you buy a bag of coffee you can check to see what it says about which beans they use and have a better understanding.

Although, if you buy quality coffee, usually it’s 100% Arabica.

If it just so happens to be an Arabica blend, you can now be left to wonder if it’s Robusta, Liberica, or Excelsa in the mix!

That’s only a partial joke. But the truth is that if it’s an Arabica blend, Robusta is more than likely your other coffee in the mix.

The thing is, they don’t usually tell you. But if you have the rare treat of experiencing Liberica or Excelsa, be sure to give it a good coffee tasting!

I hope this article has been informative and helpful. If you have any questions of comments, feel free to write them below. Coffee cheers!

That’s very cool. I had no idea. Thanks for this. 😉

Yeah check it out when you get your next bag of coffee! You’re so welcome thanks for the feedback.

Thanks for sharing your love for coffee with us. Another thing is that you had lots of information about the different type of coffee. I didn’t even know that there had been a Liberica coffee bean until now. Besides the detail that you explain for ex-¨herbal, flowery, citrusy, nutty, caramelly, spicy, fruity, floral, etc.¨ was amazing. Additionally, in your blog you knew what you were talking about, and you didn’t only talk about the four types of coffee you expanded it by talking about where it come from and that different coffee has a different method.

Thank you so much Hector! I really appreciate that and I’m glad it’s helpful and informative! I didn’t know there were that many different kinds of coffee beans either until I started writing this blog haha