If you know your way around the coffee world, then when you see Maxwell House coffee, you may be thinking something similar to me…

It’s like a close cousin to Folgers or something.

It’s a very popular coffee among work places and church events and whatnot, it’s very inexpensive, and its reputation seems to proceed itself.

Not like this is a competition or anything, but if we’re comparing Maxwell House to Folgers, I’d probably prefer Maxwell House myself.

But anyway, I think you get the point. 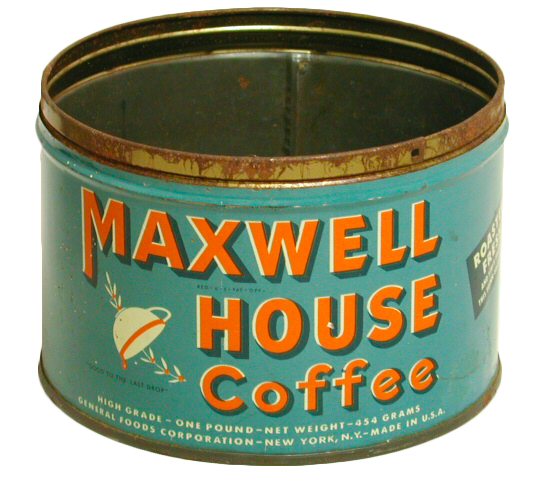 It’s a not-so-fancy coffee that is sold in pretty much every grocery store in America, it’s cheap and it tastes pretty ok, I guess.

In this article we’re going to look at some information about the company, a review of their coffee and the best deal on their best coffee if you’re looking for that.

So let’s jump right in, starting with some history about the company itself!

This large coffee producer actually has a long and interesting history.

If you’ve never heard it, they have a great jingle, and their slogan is, “Good to the last drop.”

And just like I said in the caption for the photo above, I love vintage stuff.

Here’s one of their commercials from the 70s, if you like vintage stuff too…

Currently, Maxwell House is the American branch manufactured by a like-named division of Kraft Heinz in North America, and Jacobs Douwe Egberts in rest of the world.

Jacobs Douwe Egberts is a very popular coffee company in Europe, but have a reputation specifically for their instant coffee.

Maxwell House Coffee was started in 1892 by the wholesale grocer Joel Owsley Cheek. The company was named in honor of the Maxwell House Hotel in Nashville, Tennessee… its first large scale customer.

It was the highest-selling coffee brand in the US until about the late 1980s, for about 100 years. Take that, Folgers.

So in fact, Maxwell House and Folgers are the main competitors historically when it comes to coffee sold in America.

The company has been owned and produced by several other head companies, starting with the Cheek’s company at first, then Nashville Coffee and Manufacturing Company, then followed by General Foods, and finally Kraft Foods Inc., who are the owners today.

Around the beginning of the company, in 1892, Cheek went to the person who bought food for the Maxwell House Hotel and gave him 20 pounds of his special coffee blend for free.

After the coffee ran out, the patrons of the hotel started to complain when the hotel returned to using the previous coffee, saying they liked Cheek’s coffee better.

After this happened, the hotel began to only buy Cheek’s coffee, and later agreed to let Cheek name the coffee company after the hotel, Maxwell House.

Later on, Cheek founded a wholesale grocery distributor and called it the “Nashville Coffee and Manufacturing Company”.

Their specialty was in coffee, with Maxwell House Coffee, being the central brand.

After some years, Maxwell House coffee became a respected coffee company that was set apart from its competitors.

There was confusion some years later over this phrase and who actually first used it.

A rumor had circulated that president Roosevelt drank a cup of Maxwell House when he was visiting Tennessee, and proclaimed it to be “good to the last drop.”

And funny enough, around the same time, Coca Cola was using the exact same slogan for their also nation-famous beverage.

But the rumor was dispelled when the company made it clear that Clifford Spiller, the former president of General Foods Corporation, was actually the one who claimed the coffee to be good to the last drop.

One of the biggest expansions of the company took place in the World War II era, when they started making instant coffee.

They became a major supplier of instant coffee during that time to soldiers, and also of course expanding to the homes of America.

Maxwell House added other types of coffee other than just whole bean or ground coffee in a can, such as the Max Pax ground coffee filter rings.

Through the 1900s, the company spent more and more on advertising, multiplying the budget, and thus being the most well-known coffee company in the US for much of the 20th century.

Although Folgers has now surpassed them as the most-sold coffee and probably the most well-known in the states, Maxwell House had that place for quite some years.

And, they remain one of the highest selling coffees in the country.

My Review Of Their Coffee

The company started with a great reputation of having delicious coffee, as we’ve seen in the last few paragraphs.

But unfortunately, as is a classic story, when the company gets more and more bought out, the quality goes down and leaves just a shell of the taste and quality that once was.

To be honest, I don’t buy Maxwell House coffee for my home brewing, because in my opinion it’s just very mediocre coffee.

But I’ve drank it several times in the last few years because it was the coffee that my church always brewed!

When it comes to the Original Roast, which is obviously a classic by Maxwell House, here’s my review of it…

But the taste is overall very flat, it’s hard to pick up many flavor notes other than bittersweet woody notes and a robusta flavor.

The acidity is a medium acidity, but there’s some sourness there.

And the aftertaste is pretty mild, it doesn’t stick to the palate very much.

In all honesty, there’s not too much to write about this coffee because it’s just really not that great.

With a price to show…

If you’re looking for an amazing, delicious coffee that’s not insanely expensive when it comes to price per ounce, I couldn’t recommend my very favorite coffee enough!

But, as I mentioned in the article about Folgers coffee, the good thing about Maxwell House similarly is the price point.

Currently, for a 30.2 ounce container of the Original Roast, it’s a bit over $6!

That may be the most inexpensive coffee I’ve ever found?

The bottom line when it comes to my review is this: the coffee is probably mediocre at best, and with a price to show. So if you’re simply looking to save money, this would be a good option. If you want something that tastes great, get something else.

The Best Deal On Their Best Coffee

If you’re here looking to find their best coffee, and the best deal for purchase online so you don’t even have to drive to a store to get it, you’ve come to the right place!

I don’t think the Original Roast is the best option from Maxwell House.

I really enjoy dark roast coffee, not necessarily more than medium or light, but I love a dark roast!

But the one from Maxwell House that I’m recommending is one of the stronger coffees they offer.

And I think when it comes to getting coffee from a company like Maxwell House, it can be kind of good to just go “all in”.

And that’s why I’d recommend this option if you’re looking for the best coffee they offer!

=> Click here to see the best deal on this dark and bold Maxwell House coffee! <=

If you want my honest opinion (again!), probably my favorite thing about Maxwell House is its history and story!

But I find their story so fascinating and fun to read.

It’s also really cool to know that at least in their early days, their coffee was something that actually stood out for its quality and good taste.

It’s a sad story when something good goes bad because of “selling out” and whatnot.

Nevertheless, there’s still a beauty in the fact that it’s such an old company that’s been making coffee for a long time, and was for many years the highest selling coffee in America.

That doesn’t necessarily mean that you need to go and buy some of their coffee now or anything, though.

If you want great coffee, I’d invite you to check out my reviews section, where I review not only a lot of great coffees, but coffee makers and other gear too.

I hope you enjoyed this article and found it fun and informative!

And if you purchase the coffee from the link, I do hope you enjoy it.

Just remember I’m not making any promises about it or saying that it’s an amazing coffee or anything!

And with that, coffee cheers!