There’s a huge trend that I’ve been seeing all over my news feed.

It’s a drink that definitely looks really… pretty… and was intriguing to me. 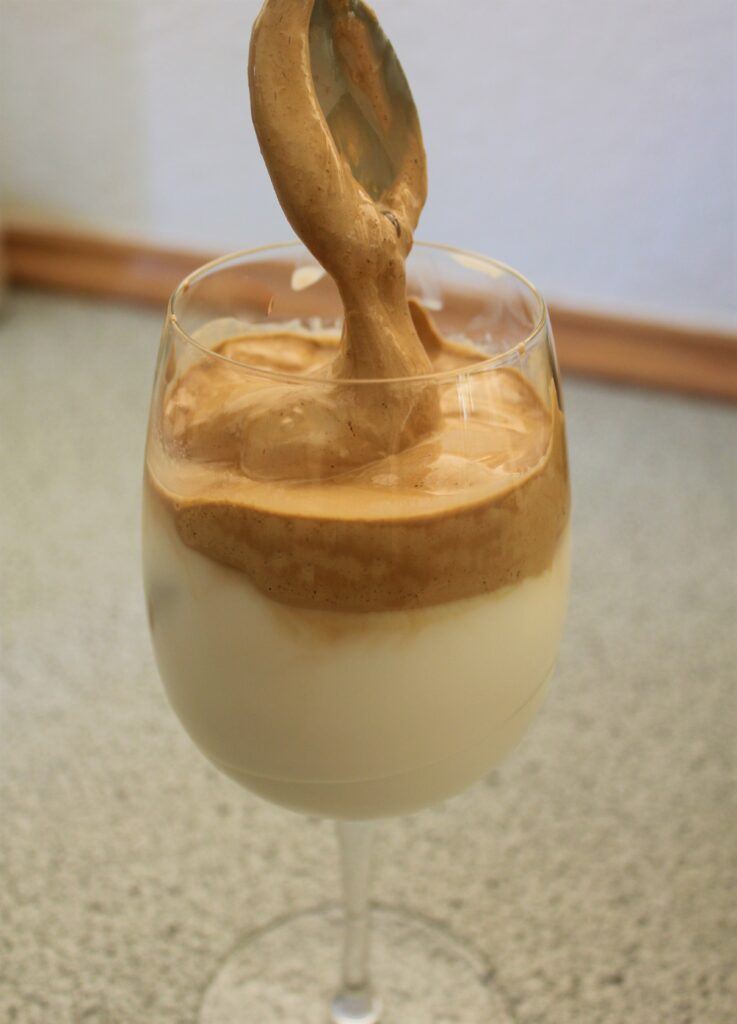 It’s called Dalgona coffee, or whipped coffee, or maybe other names too.

Like fluffy pretty mousse-y milky coffee. I made that one up actually.

In a nutshell, it’s instant coffee, sugar and water that’s whipped together and then poured over milk.

After reading about it enough times and seeing enough scrumdiddlyumptious photos of it, I had to give it a try! I honestly thought I wouldn’t like it before I tried it…

I’m not going to lie, I do like the taste of Dalgona coffee.

I guess you could say it’s a guilty pleasure.

If you like nice, sweet coffee drinks, how could you not!? I mean after all, it’s basically instant coffee, sugar, and milk. It would be like if someone likes sweet, creamy desserts but didn’t like ice cream; which by the way is the best dessert on the planet, in my opinion.

As I mentioned, I didn’t think I would like the taste of Dalgona coffee. Especially when I read that it’s made with instant coffee. Instant coffee is almost always a turn off for me.

But I’ve tried it more than a few times now, and the taste pretty great! If you’ve ever tried Vietnamese coffee, you could say it’s probably closest to that.

It also tastes like a sweet iced coffee but more creamy, and maybe a bit stronger than that, or like an iced latte from Starbucks with some classic syrup in it.

The actual whipped coffee that you put on top is a unique flavor though, because it’s made with instant coffee, or should be.

The texture is similar to a latte, but the instant coffee somehow makes it a little more grainy than a latte. It’s a bit less smooth.

When it comes to the taste, the rather copious amount of instant coffee that goes into it is offset by the sugar and the milk. 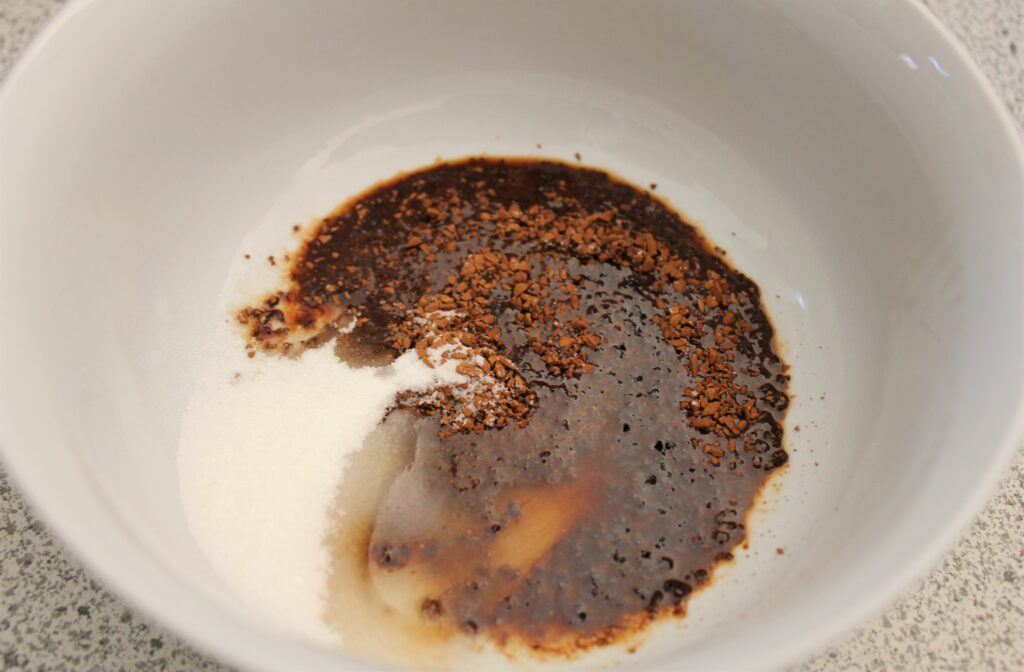 I usually drink coffee every day. But after coming off of a horrible bout of acid reflux and having to take a few days break from coffee, I tried the famous Dalgona coffee.

I’ve been drinking coffee long enough to not be jittery or shaky after drinking one cup, or three cups, or even five. But after drinking Dalgona coffee I was almost bouncing off the walls.

The recipe, at least the pretty popular one that I used, calls for two tablespoons of instant coffee for one serving of Dalgona coffee.

Before you just gloss over that without a second thought, check this out…

The average 8 oz cup of brewed coffee contains about 95 mg of caffeine.

But, in one teaspoon of instant coffee there are about 60 mg of caffeine, give or take, depending on which brand you use.

There should be one teaspoon of instant coffee for a 6 or 8 oz cup of coffee, that’s the recommended amount. That would be less caffeine than in a regular cup of brewed coffee.

But remember, the recipe for Dalgona coffee calls for two tablespoons of instant coffee.

There are three teaspoons in a tablespoon. So if you’re making Dalgona coffee just for yourself and are following the recipe, that’s a whopping 360 mg of caffeine!

And you thought espresso was strong stuff.

So it’s not just me, even though I had a small break from coffee. The funny thing about it is that you wouldn’t be able to just tell by the taste alone just how strong or caffeinated Dalgona coffee is.

The recipe is actually quite simple.

The total time to make the beverage is about 5 minutes. It takes a lot of whisking or whipping.

I have used an electric mixer instead of whisking it by hand because you have to whisk it by hand about 400 times, and I wasn’t feeling up for the challenge.

I’m very new with Dalgona coffee, so instead of giving you the recipe and the instructions to make it myself, I’ll send you to the site where I got it from. It has the recipe and some great pictures and a video with it!

The recipe is near the bottom of the article. In the video, she uses a hand whisk. But unless you want the workout, I would suggest using a hand mixer (electric mixer) to make the whipped coffee.

Here is the website with information, pictures and a video for how to make it 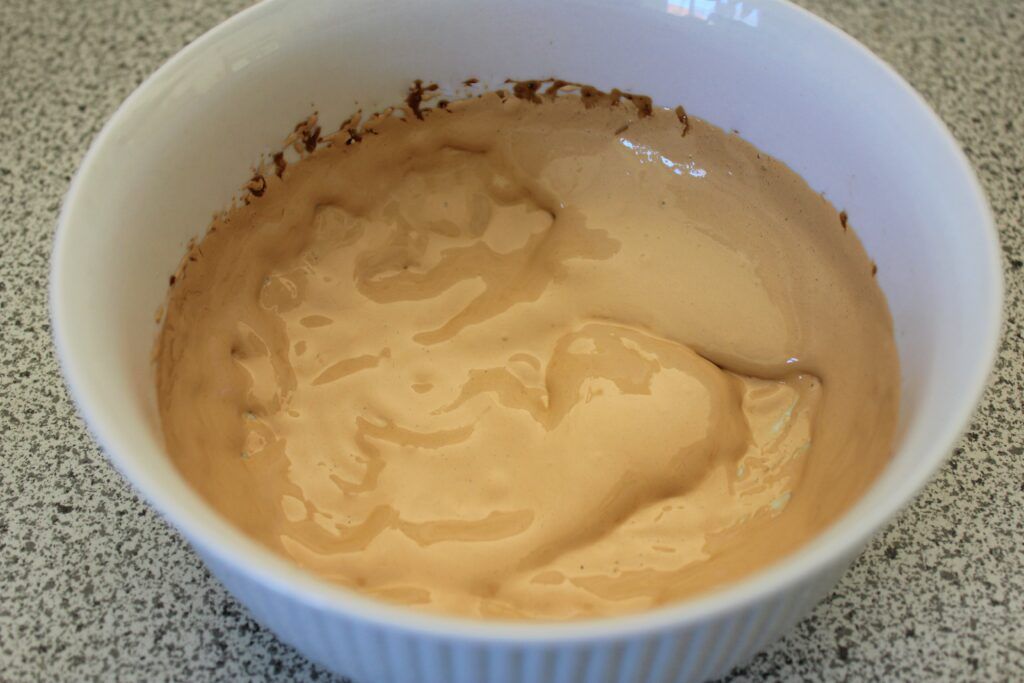 You need to mix it all together after you put the beautiful, luscious whipped coffee on top. It becomes much less pretty at that point, which is why no one has put up pictures of that.

In pictures and videos, it only shows it just after people have put the whipped coffee on top.

But if you just spoon out the whipped coffee with a little milk, like in some of the video clips, you’re practically getting a mouthful of instant coffee. As much as I love strong coffee, I couldn’t handle it.

Not only does it take a while to whisk or mix the whipped coffee, but it also takes a good bit of stirring to get the stuff mixed in with the milk after you pour it on top.

With how sugary, creamy and milky Dalgona coffee is, I would say it’s more of a dessert coffee drink. There is actually quite a bit of sugar in it.

I wrote an article about how many calories there are in coffee, and Dalgona coffee is pretty high up on the calorie list! With two tablespoons of sugar, it’s one of the big boys of calorie loaded coffee concoctions.

Pros & Cons… In A Nutshell

The way I see it, here are the pros and cons of Dalgona coffee.

Here’s Maybe A Better Way To Make It…

As Dalgona coffee is still a young, budding art form, people are finding easier and/or better ways to make it than putting huge amounts of coffee and sugar.

If you want to make one serving of Dalgona coffee just for yourself, and don’t need it to look so pretty, here’s maybe an easier/better way of doing that…

Instead of using extremely generous amounts of instant coffee and mixing it in a bowl and adding more cleanup, you can add less coffee and sugar (to your taste) in the glass or mug that you’ll use, and mix that with just one whisk attached to a hand mixer (or whisk by hand).

This takes half the time of the traditional recipe to whisk the whipped coffee.

When you’re done, all you need to clean is the single whisk you used. You can then pour the milk and ice on top of that and it will also be easier to mix in the cup.

This would be something for those who really enjoy the taste and want a quicker, easier way to make it just for yourself.

Is It As Spectacular As People Make It Look!?

I would maybe say it isn’t.

“But wait Danny, didn’t you say you think it tastes good!?

Yes I did, I think it tastes great!

But if it’s a sweet iced coffee drink you’re looking for, there are much easier and more delicious to make iced coffee than making Dalgona coffee.

Yes! I do think it’s a cool way to make a sweet, nice looking coffee drink. But I would definitely say it’s more of a drink for special occasions, when I’m in that fun, sweet tooth kind of mood.

In short, Dalgona coffee is a fun, unique way to make a pretty good tasting iced coffee beverage, but with the time and effort it takes to make and clean it, it’s just a once in a while sweet treat for me.

I wouldn’t say it’s a gimmick, because it tastes good and it’s fun! But overall I think it’s more hyped up than it is a great, quality coffee drink that I could highly recommend.

So if you haven’t tried it yet, you should definitely give it a go! Maybe you’ll disagree with me… or maybe you won’t like it at all. But it’s worth a shot, and it may become something you’ll regularly enjoy for your morning or afternoon pick me up. 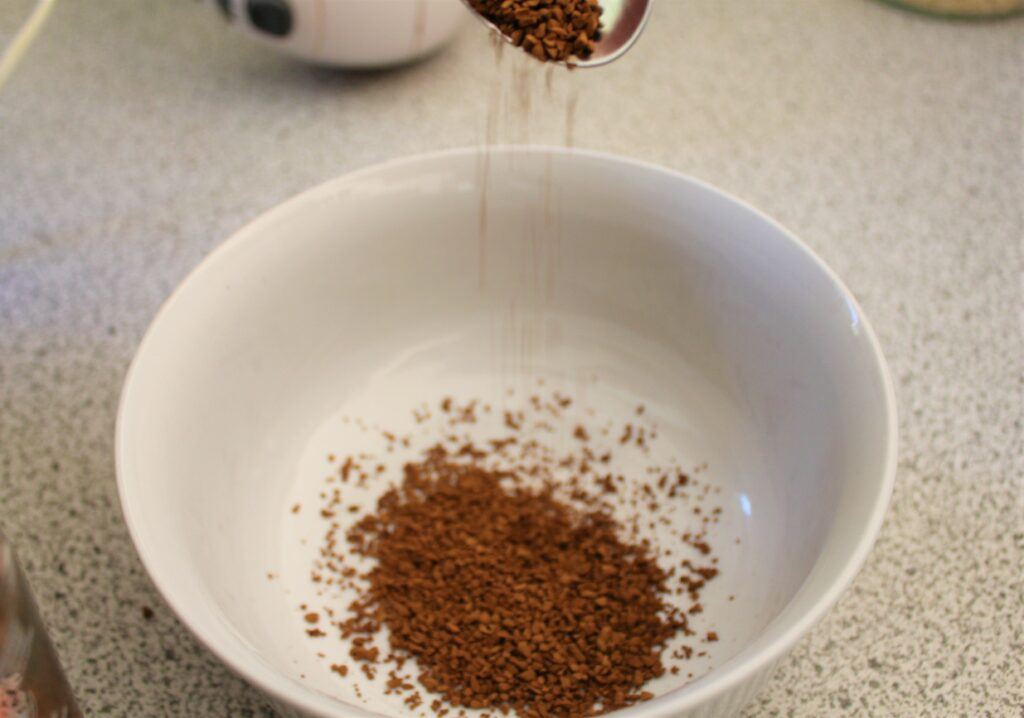 I hope this article was helpful for you with this new coffee trend! Let me know if you have any questions, comments or anything else! Coffee cheers!

I really like my coffee sweet too lol. I think this coffee looks interesting but that sounds like way too much caffeine for me. Thanks for the info I appreciate it!

Thanks for the comment Randi! I’d say it’s definitely an interesting drink yeah! I do like the taste but for sure… there’s SO MUCH caffeine in it. There are other options for making iced coffee or that kind of drink so it’s nice that you don’t just have to make this. Thanks again for the comment and enjoy your coffee brewing!