Bob Dylan is a legend, a phenomenal songwriter, and a genius in his own right.

He’s also an American cultural icon who has written numerous songs that have been covered countless times. I’ve covered his songs myself.

His voice is, well, not the most pristine, beautiful voice you’ve ever heard, I’m sure. But at least for me, I’ve been able to look past the gravelly voice and appreciate his awesome folk songs and amazing lyrics.

Here’s why I love this album, and enjoying a nice cup of coffee while I listen. 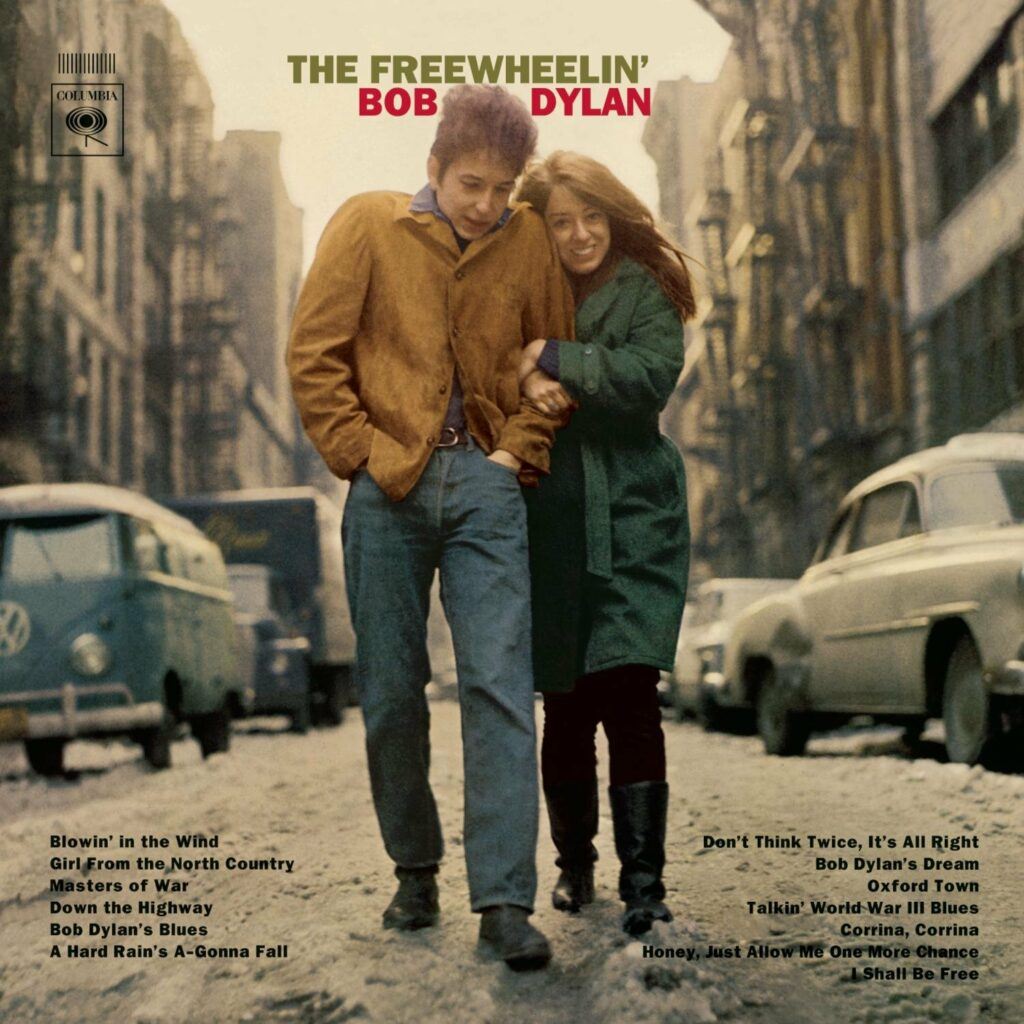 Bob Dylan’s first album was a self-titled album, released in 1962.

It contained 13 songs, with only two of them being originals written by Bob himself.

Oddly enough, The Freewheelin’ contains 13 songs, with only two of them not written by Bob. This album really was the showcase of his songwriting. The instrumentation on the album is light, mostly being just an acoustic guitar, Bob’s scratchy voice, and his harmonica.

The song “Corrina, Corrina” is the only song that has other instruments, featuring drums, extra guitars, double bass, and piano. It’s a 2-minute 42-second song that, even though it has a “full band”, is still very much on the soft side.

The feel of this album is so raw and rustic. I love it. It feels like you’re on a road trip with Bob through the highways and towns of America. He captures the essence of that period of American folk music and culture like no one else.

You really have to listen to understand 🙂

It’s so raw, for instance, that at the end of “A Hard Rain’s a-Gonna Fall”, I can even hear maybe the slightest of a flub (small mess up) on the guitar at the very end of the song. But it’s folk, it’s Bob Dylan, so in that case it doesn’t make it any the worse. It makes it better if anything!

Pay Attention To The Lyrics

The lyrics on this album are nothing short of genius, rich, and compelling. Bob is a poet and wordsmith. The themes range from political, social, philosophical, and some surrealism.

There’s a good amount of humor, nonsensical humor at that. Just the kind I love. Some of his lyrics made me burst out laughing the first time I heard them!

If you want to listen to some of his fun, funny songs… check out “Bob Dylan’s Blues”, “Talkin’ World War III Blues”, and “I Shall Be Free”. I think the first time I listened to “I Shall Be Free” I laughed through most of the song!

Bob just has a genius way of shooting humor into his message.

Any Coffee, Thank You, Just Black!…

In my coffee + music pairings, I think it would just be silly and cheesy to say that a certain music would go well with a dark roast or light roast coffee, or a certain flavor. That’s just too much.

But when it comes to something so awesome as this classic folk album by Bob Dylan, I can’t help but suggest that you enjoy your coffee black when you listen! It somehow completes the whole experience.

More Than Just My Music Critique

See, I get that the idea of coffee + music pairings might just seem like my opportunity to just write about music and you might ask, why not just call it your own little music critique without the coffee, Danny!?

The thing is, I don’t always appreciate listening to just any kind of music while I drink coffee! In general, I love almost all kinds of music, from classical to metal. I love jazz, rock, indie, reggae, rap, blues, funk, folk, pop, and many others.

There are just certain kids of music I wouldn’t listen to while I want to have a pleasant experience drinking coffee with. As much as I love metal, for example, I don’t usually prefer to listen to that while I drink coffee and want to contemplate the mysteries of the universe.

I really enjoy many rap artists also. But when I pour myself a morning Joe and want to turn on some music, I would hardly ever put on rap, especially in the morning.

So when it comes to the coffee + music pairings, I’ll usually recommend songs or albums that have a pretty mellow and maybe more acoustic or organic feel to them. And again, I also won’t say that a certain roast or region or flavor of coffee will pair well with any music recommendation… my cheesiness meter doesn’t go that high!

But in my opinion, if you pour yourself a cup of black coffee on a tired morning and put on The Freewheelin’, it’ll calm your nerves and give you a freeing, open road, ready for your day kind of feeling. It does for me, anyway! You could even make cowboy coffee to go with.

I owe my appreciation of this album to a good friend of mine who introduced me to it when I was in high school.

I was a punk rocker at the time, and Bob Dylan is almost as far from punk music as you can get! So when my friend introduced me to the album, I thought some of the lyrics were great but couldn’t hardly stand the music.

Thankfully, over some time I really got to love and appreciate this album, and a lot of Bob’s other albums. I’m definitely grateful that my friend helped me broaden my horizons! So if you don’t like the album either, just give it a few listens and maybe I’ll help you broaden your horizons.

I really hope you enjoy this album! Have a great day. Coffee cheers!

hahahaha awesome album, awesome article … man those were some fun times we had!!! Now I’m waiting for the op ivy coffee pairing!

Haha thanks dude! Those were great times for sure!! That would be an awesome pairing for sure, Op Ivy never gets old!