Jacob Collier is a musical genius.

Aside from that, he also just has a really fun personality and seems like an easy-going dude. 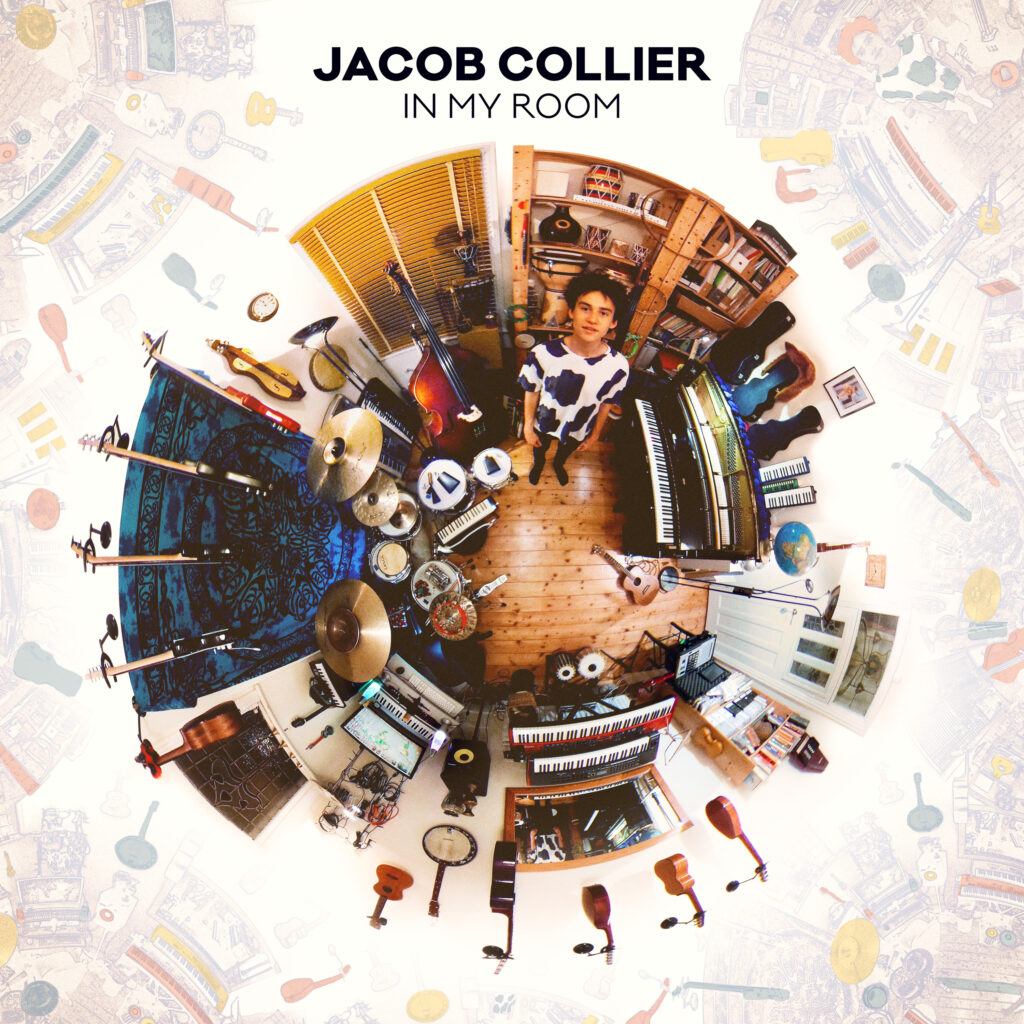 It’s easy to name the genre for some albums. I did a coffee + music pairing for Bob Dylan’s The Freewheelin’ and that’s a pretty straightforward album. It’s folk.

Plain and simple. Nothing else, just folk!

But In My Room is just the opposite in that sense. It’s jazz, indie, pop, rock, world, funk, folk music. Probably some more too that I’m not remembering right now.

First Album From A Genius

Not only is he a musical genius, he’s also a multi-instrumentalist.

He plays a lot of instruments, and he played every album featured on the album. It seems like there’s about 10 instruments on there!

I’m a musician myself, and I’ve heard Jacob speak in YouTube videos about music theory and he knows his stuff. He talks about things I don’t even understand, even from a jazz point of view. And jazz is complicated enough.

As jazzy as he is, this album certainly isn’t just pure jazz. It really is an eclectic mix of genres that has a jazzy undertone throughout, but the music really is beautiful.

He really puts a lot of joy into his music.

One of the songs on this album is a cover of the “Flintstones” theme song! Which, incidentally, is the main song that propelled him to his musical fame.

In his “Flintstones” cover, he features his dazzling, blazing virtuosic vocals and vocal reharmonizations. If you don’t know what that means… just listen to the song 🙂

Let’s just say that his music is pretty complex.

And his vocal range is insane.

Anyway, if you listen to this song in the morning as you’re waking up and sipping on your coffee, it’ll be sure to help you wake up and brighten your day!

Really Accessible At The Same Time

See, even though he’s a musical genius and pretty jazzy, a great thing about this album is that it’s pretty accessible to most everyone.

You don’t have to love jazz or bebop to love In My Room.

It really is a beautiful album. It’s fun and joyful like in the “Flintstones” and “Woke Up Today” but also has very beautiful and peaceful moments like in “In My Room”, “Hideaway”, “In the Real Early Morning”, etc.

It’s pretty far from simple commercial pop music, but it’s not as much of a musical niche as bebop jazz or something.

Ok, not to just sound weird or anything.

But the music on In My Room and his other albums, seems to have a profound, amazing effect.

When I first listened to the album, I strangely felt more peaceful and almost like there was a greater harmony in myself. I definitely felt like I got sucked into the beauty of Jacob Collier’s musical world.

It’s hard to explain but it’s almost like there was a healing effect of it.

And, I found out it’s not just me! If you watch the YouTube video for his song Bakumbe, from his album Djesse vol 2, there are multiple comments with people saying similar things!

Listen to the In My Room yourself and see if it happens to you too. I would be surprised if you didn’t at least feel more peaceful or something 🙂

The truth is, this is just a great album and listening to it with or without coffee is an experience!

As I was writing this I was sipping on some delicious Sumatra coffee, and to be honest I had a pretty bad headache. But the whole experience seemed to make the headache dissipate at least a bit.

And I hope that you’ll really enjoy this album if you give it a listen.

Even though Jacob is a musical genius and whatnot, his music is really something that, I think, can appeal to everyone because of just how beautiful and joyful it is.