“Does coffee taste ok if I put it in the freezer?”

“Am I allowed to freeze it?”

“Does anything weird happen to the coffee if I put it in the freezer?”

If you’ve asked yourself any or all of those questions then don’t worry, I’m about to answer them for you! 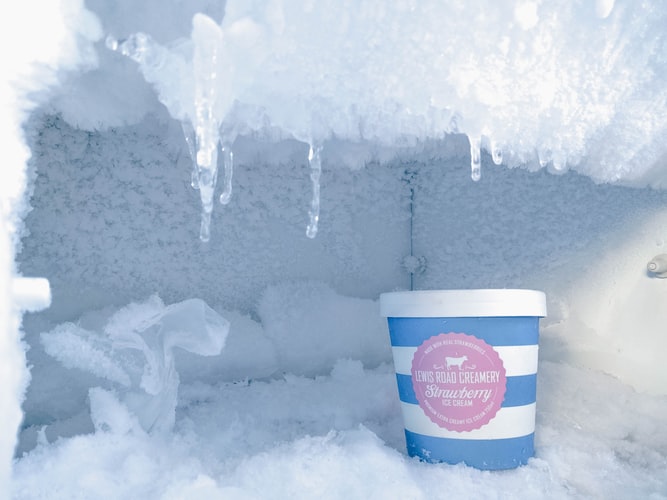 In this article, we’ll look at some properties of coffee and what happens if you store whole bean coffee in the freezer, and my personal taste test!

By the way, when I talk about storing coffee in the freezer, in this article I’m specifically speaking about whole bean coffee.

I’ve heard and read about different viewpoints on if whether or not it’s “good” or even ok to put coffee in the freezer.

So, I figured why not just try it myself and see how it tastes! I mean, here’s the deal, we can talk about science and chemistry all day til we’re blue in the face…

But the fact of the matter is this: if coffee tastes better when stored in the freezer, then by Jove store it in the freezer and it doesn’t matter what “experts” say! Right?

On the other hand, if coffee tastes bad when after being stored in a freezer then there you go, simply don’t store it in the freezer!

It’s as simple as that, really! At least for me it is. Do what tastes best!

Now, with that being said, here’s some information and my personal take on the issues of ‘can you freeze coffee?’.

My answer may surprise you…

First off, for the record: to get the maximum freshness out of your coffee, consume it within two weeks of purchase if pre-ground and one month if whole bean.

You will always get the best flavor out of your coffee if you consume it within that time.

The only way you could preserve the flavor perfectly after months of storage would be if you had a magical time capsule that made your coffee not age.

Such a device hasn’t been invented yet, as far as I know!

Keeping your coffee in the freezer or sealing it 100% airtight and keeping it out of sunlight will not preserve the flavor completely!

Now that that’s out of the way…

That’s just the fancy way of saying that it takes up and retains moisture. It also absorbs odors and tastes from the air around it.

But big fancy words aside… the main fact of the matter is that oxygen is the real killer of coffee flavor.

However you store coffee, whether in the freezer, refrigerator, or in room temperature, you need to have your coffee properly sealed!

Coffee also gets “stale” in its own way. But because it’s already roasted and it’s hygroscopic, it’s not the texture that changes, but the flavor goes right out the door.

Now that we’ve had a little of science, let’s look at my own personal experiment with how coffee held up after being properly sealed and stored in the freezer!…

I Froze My Coffee

I bought a bag of Rainforest Reserve coffee by Copper Moon Coffee, and that’s what I was enjoying when I did the taste test. 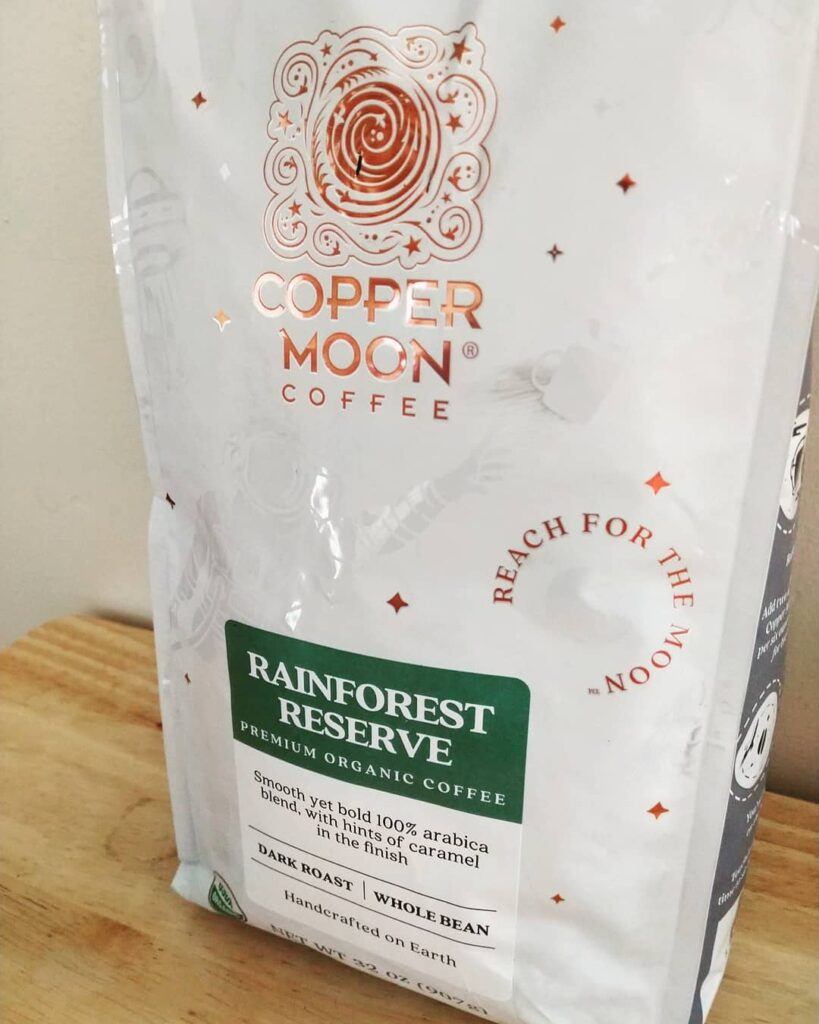 After about a week of using it, I put some in a separate bag and tightly seal it and put it in the freezer. The rest I kept in the original bag just like normal.

Are you ready for what I found?…

The one from the freezer maintained the taste even better, in my opinion! 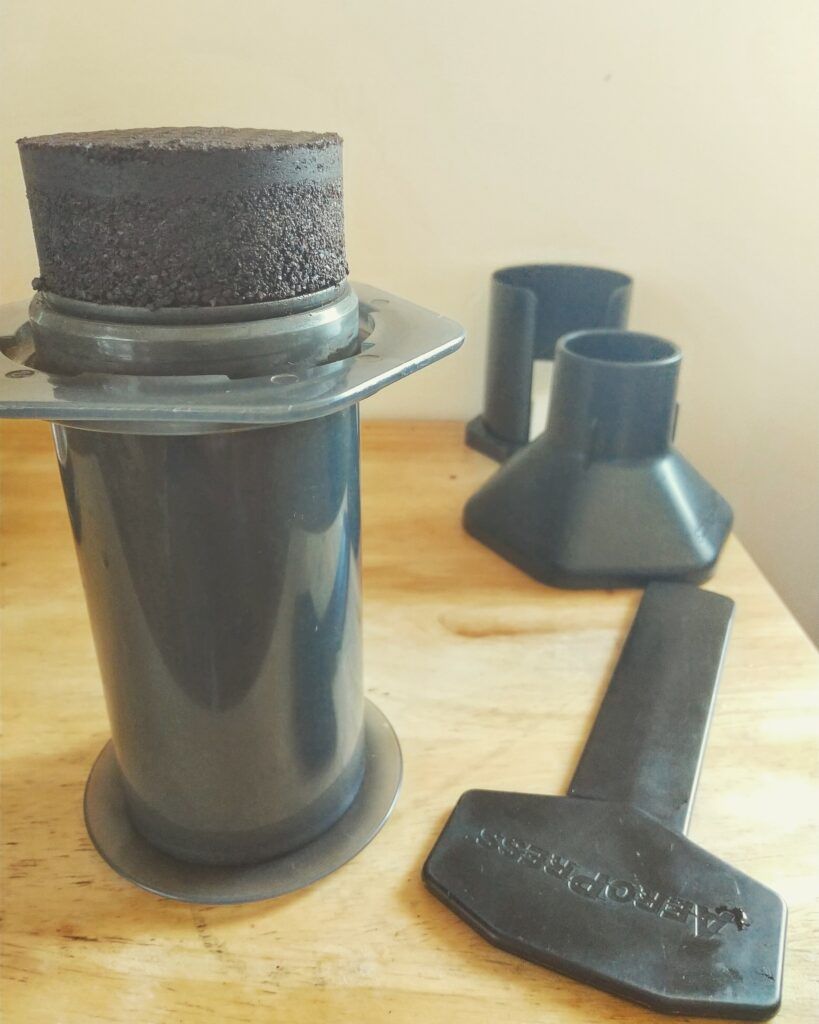 In my experience, the beans that I put in the freezer really maintained a nice aroma. The aroma was still strong and very nice in those beans.

This coffee that had a slight chocolate aroma before, had a really strong and wonderful chocolate aroma after they were in the freezer. So it at least preserved the aroma.

The taste was very nice. The coffee held more of its essence and vitality after being in the freezer.

In fact, I tried it multiple times and every time I really liked it! The taste was actually super good, and again, it really maintained the essence of the coffee very well.

The chocolate and vanilla aroma/taste wasn’t quite as present. But it had a really nice sweet and robust flavor and the body of the coffee actually felt like it became even better after being in the freezer.

Am I making a definitive statement? Nope!

Am I saying everyone should freeze their coffee? Nooooo.

But I’m definitely saying that in my experience, the one that I put in the freezer sure did maintain a good vibrant taste!

So, if you know you’re going to be sticking with one coffee for a while (longer than a month), I’d say you should absolutely try it and put some of it in the freezer!

You’ll probably be surprised at how good it tastes, just like I was.

You can’t go wrong by trying it.

Coffeedential is not actually a word.

But this seems to be yet another debate among coffee lovers and baristas, whether or not one can freeze their coffee and get away with it.

Before I tried it for myself, I had read in at least a few articles from seemingly reputable baristas that it’s not best to put it in the freezer because the flavor will flatten.

I read this and just trusted it to be true.

But I had it suggested to try it for myself because there are some baristas who do recommend freezing coffee. So there you go, I tried it and definitely enjoyed it, and that’s what I found!

Once again we see, or I see, with coffee we shouldn’t necessarily always trust the opinions of just one hipster blog or whatever.

You can trust it maybe and go with it but try stuff out for yourself too and see what you think!

With a mixed bag of opinions in the coffee world about whether or not it’s ok to freeze coffee, I was under the impression it wasn’t a good idea.

But after trying it for myself, I’m pretty thoroughly convinced it will preserve a delicious flavor in your coffee!

So here’s my challenge to you…

Try the same thing I did!

Set aside some of your coffee in the freezer.

But, make sure you have it in an airtight bag or container and that it’s well-sealed!

Then when you’re on the last part of the room temperature coffee in the original packaging, brew the coffee from the freezer in a separate brewing but on the same day.

Do this either side by side or soon after each other so you can compare them.

See which one you like better and if you also enjoy the taste of the one that’s been in the freezer!

You can even wait a few days or even weeks and if you can recall the taste of the original one, compare it with the one that was in the freezer.

I don’t call it “frozen coffee” because it doesn’t really get frozen.

But semantics aside, I hope you found this article helpful and that you can try it for yourself and have fun doing it!