There’s much confusion and disagreement about this among coffee lovers.

You can order the same espresso beverage at different coffee shops and get something pretty different! And it really shouldn’t be that way.

There are so many espresso drinks, big and small, and so many fancy sounding names to remember.

From a macchiato to cortado to a latte and cappuccino, and everything in between.

To understand what some of the less popular ones are, we should look to the Italian language, and we’ll do just that.

So here’s some more information about espresso, and all the espresso drinks explained!

What Exactly Is An Espresso Drink?

Probably many or most reading this will know what an espresso drink is.

But whether you do or don’t, let’s just be clear what exactly an espresso drink really is!

First off, espresso is made by pushing hot, pressurized water through finely-ground, tightly packed coffee beans. The coffee beans are usually an espresso roast, which is coffee roasted specifically for making espresso.

So an espresso beverage is any drink made with espresso in it.

Baristas and coffee lovers alike have come up with so many variations for mixing espresso and milk especially.

But now we’ll cover all of the drinks, from straight up espresso to the more fancy stuff.

All The Drinks… Explained!

Well it makes sense that the first one would be just a single shot of espresso, doesn’t it?

A single shot of espresso is one ounce. So it’s a pretty small.

But it really packs a punch, especially if you drink it black! Which I enjoy doing pretty often.

There are about 64mg of caffeine in a single shot by the way. That’s compared to about 12.5mg of caffeine per one ounce of black coffee. So by volume, espresso has around 5 times the caffeine of regular coffee.

But most people only drink one to four shots (ounces) at a time.

A ristretto is a stronger shot of espresso, and thus it’s even smaller than a single shot. It’s made using finer coffee grounds and half the amount of water.

It’s basically good for when you want just a small sip of a strong coffee drink!

This is just another word for a double shot of espresso.

This means that instead of one ounce, like in a single shot, there will be twice the coffee grounds and twice the water, making two ounces.

If you’re needing even more of a kick than a single shot or even a doppio, you can always order a triple shot of espresso.

This would be three ounces of espresso.

I’ll admit, there have been a few times when I was working at a coffee shop where I pulled a quadruple shot for myself.

“Lungo” means “long” in Italian, and this type of espresso shot is often called a long shot in American coffee culture.

It’s called Lungo because, using the same amount of beans, you pull the espresso shot for longer than a regular espresso shot.

A normal espresso shot takes between 18 and 30 seconds to pull, but a Lungo or long shot can take up to a minute to pull.

The result is more caffeine and more diluted shot of espresso.

It’s generally about twice the amount of water of a single, double, triple shot, etc.

Translated from Italian, this one means simply, “Espresso with cream”.

This easy beverage is just espresso with whipped cream.

This is one of my very favorite espresso drinks, I really love this one and I’ve ordered it countless times!

If you want a little pro tip that I’ve learned over the years, when you order this one at a coffee shop, ask for the whipped cream on the bottom.

This way, it mixes in with the espresso better.

The presentation isn’t as nice, but it’s more drinkable and tastes better that way.

We’re (kind of) going from small to big on this list, and before we get into bigger lattes, there’s at least a few more to talk about.

“Piccolo” means “small” in Italian, so a Piccolo latte is a small latte.

It’s very aptly named, because it’s made with a ristretto shot of espresso and topped with a bit of steamed milk.

One could almost translate it to “mini latte”. It’s usually served in a demitasse or espresso cup.

Time for another Italian lesson.

This beverage is made by using either a single or double shot and “marking” it with both steamed milk and foam.

The amount of milk and foam is very small, hence the word “marked”. It’s best to use a spoon such as a tablespoon for putting the foam on top to make sure too much foam isn’t added.

An espresso macchiato is also served in a demitasse or small cup.

Well, this one’s actually Spanish. So you’re on your way to becoming a multi-linguist!

“Cortado” is the past participle tense of the Spanish verb cortar (to cut), in the sense of “dilute” or cutting the strong espresso taste a bit.

It’s made with equal parts espresso and steamed milk, to reduce the acidity.

The milk for it should be steamed but not foamy like most of the other drinks on the list such as lattes.

It’s natural or normal if some of the more frothy or foamy milk gets into a cortado, and gives it a nice texture.

Also noteworthy is the fact that a cortado and a macchiato are similar drinks with similar sizes, but they are different.

This is one certainly not for the faint of heart.

A Red Eye is simply brewed coffee with a shot of espresso poured on top.

A Black Eye is brewed coffee with a double shot of espresso (doppio) poured on top.

This drink may or may not hit you so hard that you get a black eye.

Only similar to its espresso counterpart in the concept of being “marked”, a Latte Macchiato is when you pour a third to a half a cup of steamed milk into a glass and then add a shot of espresso on top.

Thus you mark the steamed milk with espresso.

It’s basically a fun and different way of making a latte.

This one is similar to a Caffe Latte, which we’ll look at in just a bit.

It’s made by adding hot water to shots of espresso, to basically dilute the espresso. The strength can vary depending on how many shots you use and how much water you add.

The espresso to water ratio can often be similar to the coffee to milk ratio for a latte.

You can check out the Wikipedia page on Americano to see maybe why this drink got its name.

The classic espresso beverage Cappuccino is made with one third espresso, one third steamed milk, and one third foam.

The foam is the kicker in a Cappuccino. It should be as frothy as possible, and this drink really emphasizes the milk foam.

Many baristas and coffee shops make Cappuccinos with more than one third foam, and will put more foam than espresso or milk.

But the classic recipe is one third of each.

This one’s more commonly called just a “Latte”, and it’s maybe the most popular espresso drink.

A Latte is made with one third espresso, about two thirds steamed milk, and them topped off with a small layer of foam.

The main ingredient in a Latte is milk, which is fitting because “Latte” means “milk” in English.

The best type of foam for a Latte is micro foam, but how you do the foam for this one isn’t as important as a Cappuccino. But a Latte needs to have a layer of foam on top, generally around a half inch.

16. Mocha (And Other Flavored Lattes)

A Mocha is simply a Latte that has either some kind of chocolate syrup or cocoa powder added to it.

You could definitely call it a Chocolate Latte, because that’s exactly what it is!

But no one calls it that, so if you order one, just call it a Mocha 🙂

I don’t think I need to say any more though.

And the concept is exactly the same as a Mocha; just make a Latte and add whatever flavor you like, for example vanilla, etc.

But wow it sure tastes good.

An Affogato is just espresso poured over a scoop or two of ice cream or gelato.

It’s a wonderful treat, especially if it’s made with good quality, delicious gelato.

And there you have it, pretty much every espresso beverage you could want to know about!

Yes there may be a few that aren’t on my list, but this list has every one of the popular ones and even the lesser known ones.

Unfortunately, I can’t guarantee you that if you order them at a coffee shop, they’ll make it exactly how I describe them.

But if it’s a good coffee shop, they should make it pretty stinkin’ close to that! You can at least order with confidence.

And these are all the correct definitions for all these drinks. 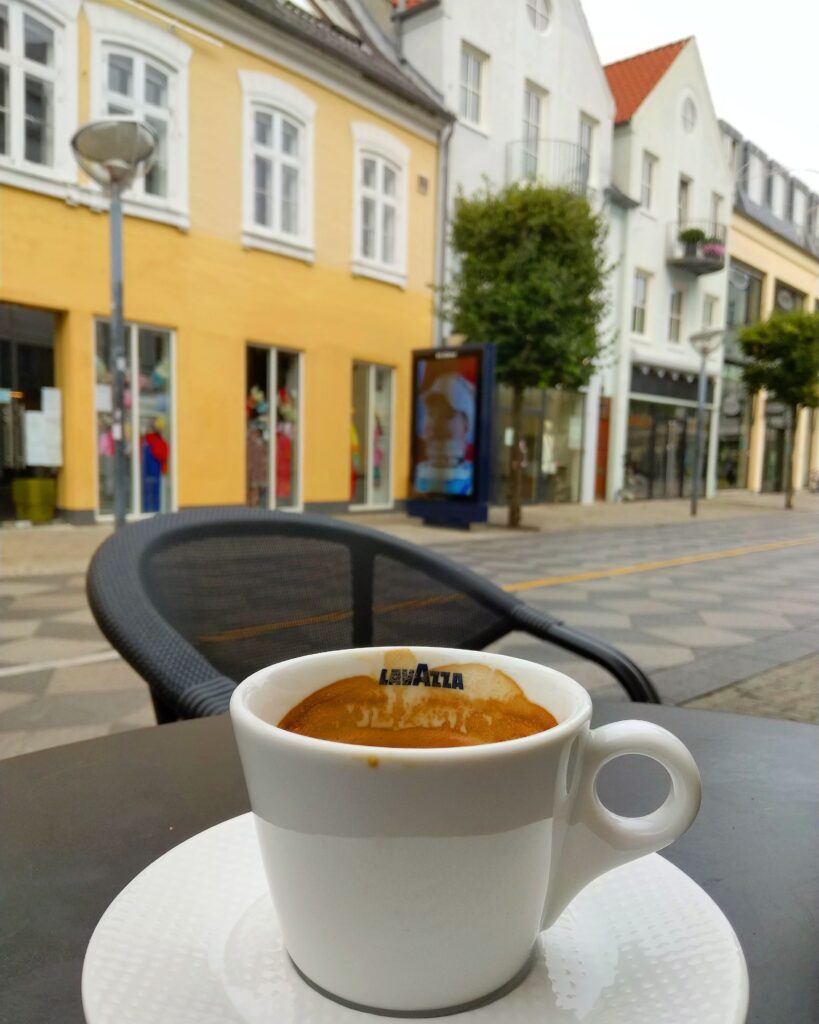 If you’re wanting to make these drinks at home, which is always an awesome idea, and you don’t have an espresso machine, you can see my article about the best espresso machines for brewing at home.

There are so many great options on there, from about $30 and up! There’s really something for everyone.

What’s your favorite espresso beverage? You can let me know in the comments below!

And if you’re wondering what my favorite is…

It’s pretty tough to choose a favorite, but when it comes down to it, that’s the one I order most at cafes. So I can pretty safely say it’s my favorite.

I hope you found this article helpful… latte cheers!